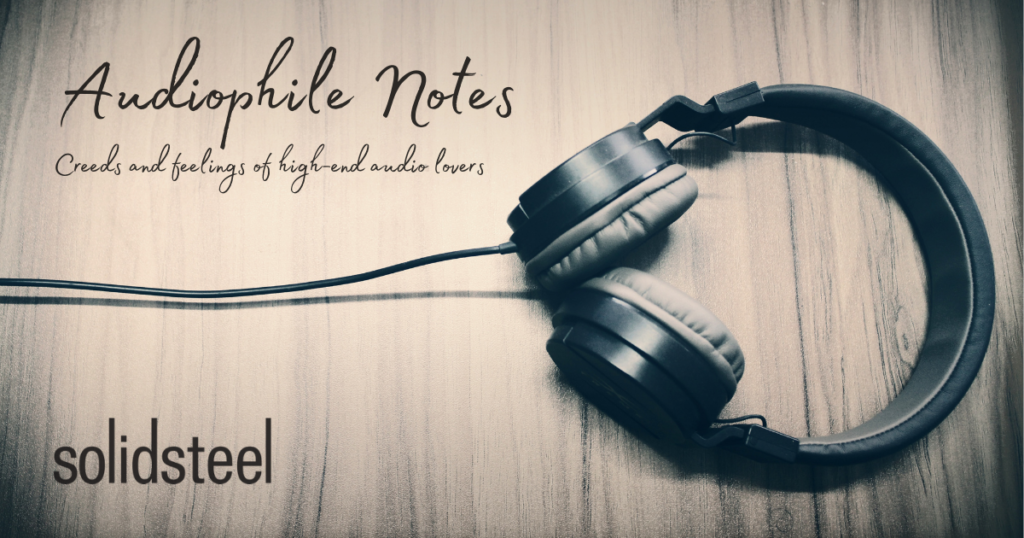 Mr. Daniele grew up at the turn of the Seventies and Eghties, with music accompanying him since he was a child.
At the beginning music came out of a red plastic record player, playing what would become the great rock classics.
Later he managed to get his hands on his father’s stereo, an “all-in-one” Allocchio Bacchini: turntable, amplifier and the two speakers hinged to the sides that rotated forward.
Soon his first vinyl single arrived, the first stereo, the first LPs and the tweeters would burn at least once a week… in short, the road to high fidelity was still a long way, but nevertheless he always would carry music in his heart.

He is a proud owner of a Solidsteel VL-2 Vinyl Record Storage & Hi-Fi Rack and a Solidsteel S3-A Power Amp Stand.

– How did you become an “high fidelity” enthusiast?

This question allows me to express a particularly dear thought.
I think I have become a high fidelity enthusiast because I was lucky enough to meet a Hi-Fi system salesman who was truly in love with music and good listening.
I mean that in order to ignite passion for high fidelity, even in those who already love music, you need someone to help you approaching it and explaining it to you.
It would be nice if all of us contributed to this, together with professionals in the sector. 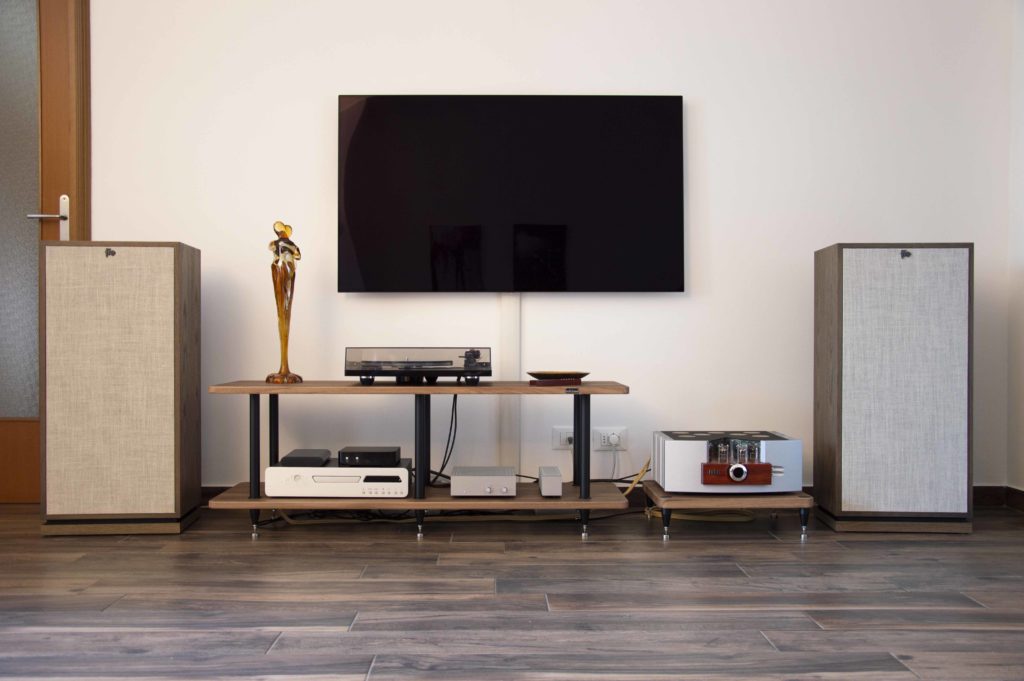 – Describe your Hi-Fi system and tell us more about the components. Is there any element that you would never replace?

My Hi-Fi system, fortunately or unfortunately, is always evolving.
It currently consists of two sources: a practically unused Atoll CD80 CD player and a Rega Planar 6 turntable with Rega Ania cartridge.
The solid state phono preamplifier with separate power supply is a Pathos Acoustics “In The Groove”.
The valve / solid state hybrid integrated amplifier is still from Pathos Acoustics, this fantastic Italian company that not only does craft extremely good sounding machines but also creates objects of beauty… which can only be Italian.
Here, the Logos MKII could be the most difficult component to replace right now. If I really had to look for a replacement, I would certainly look for it at Pathos.
Finally the speakers, a pair of Klipsch Forté III, which have recently replaced the previous Sonus Faber.
I was looking for something energetic, kind and precise, exactly what they are. I would add their versatility; do you know when they say that a good speaker must sound good with any musical genre? These speakers are there to prove it. 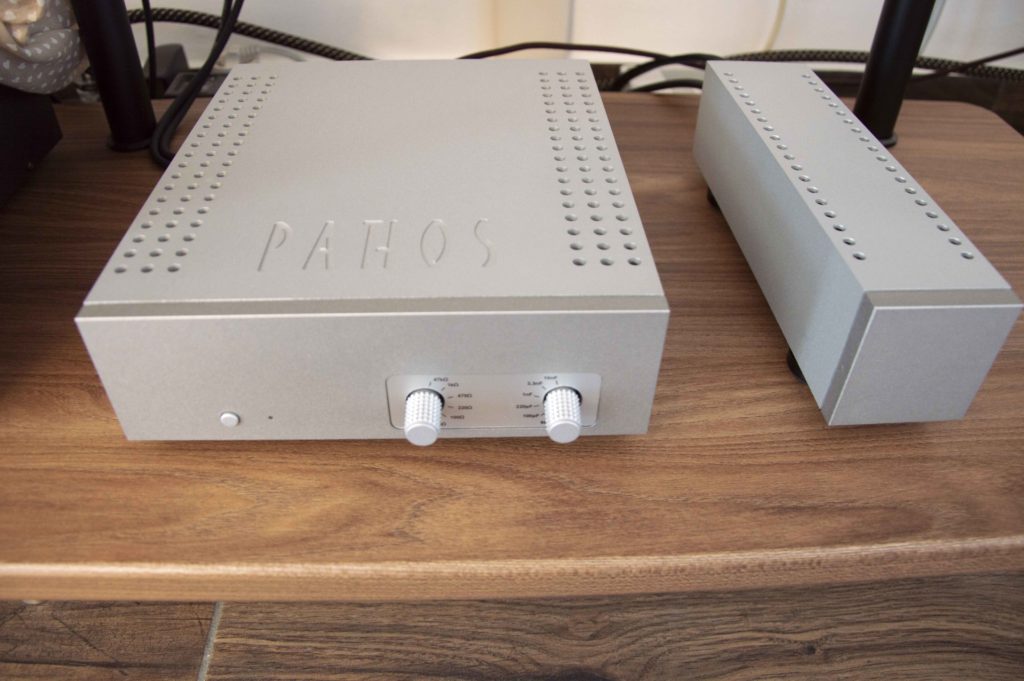 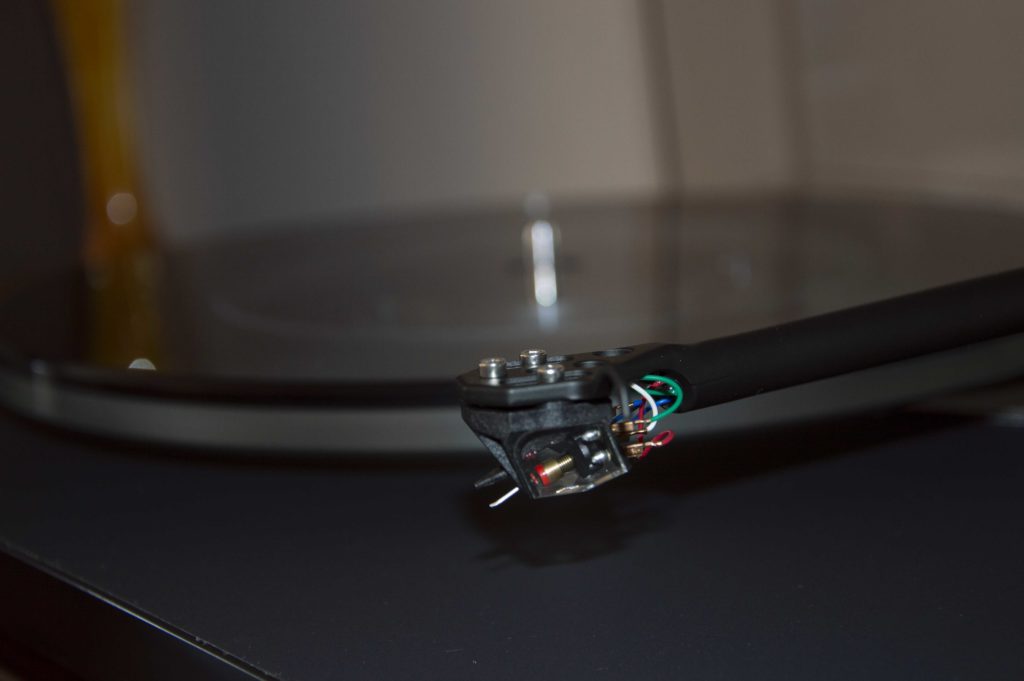 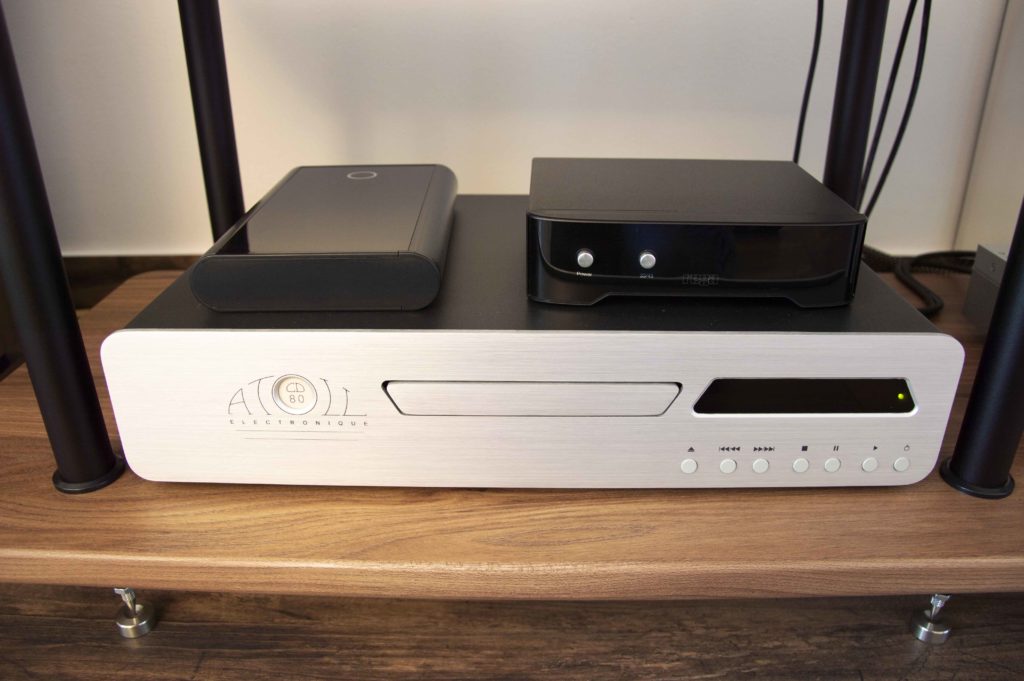 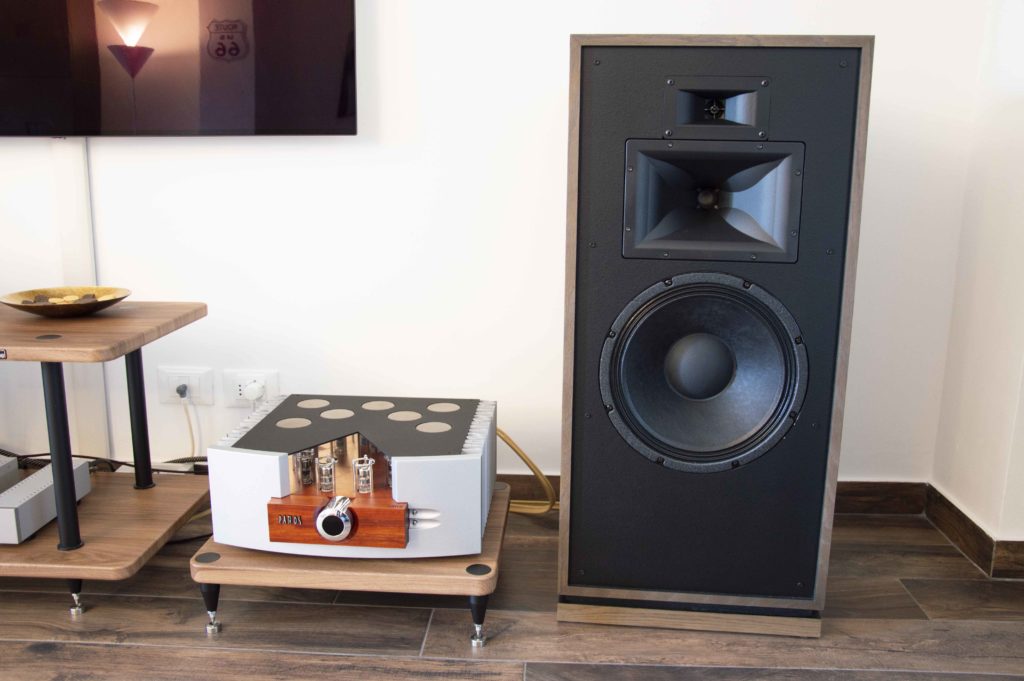 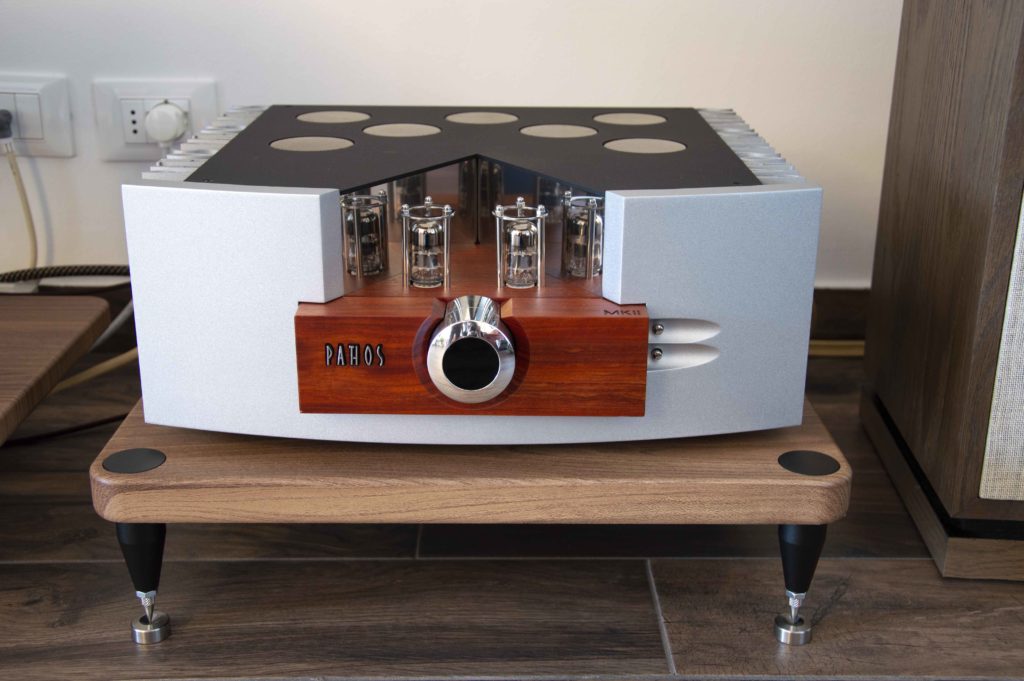 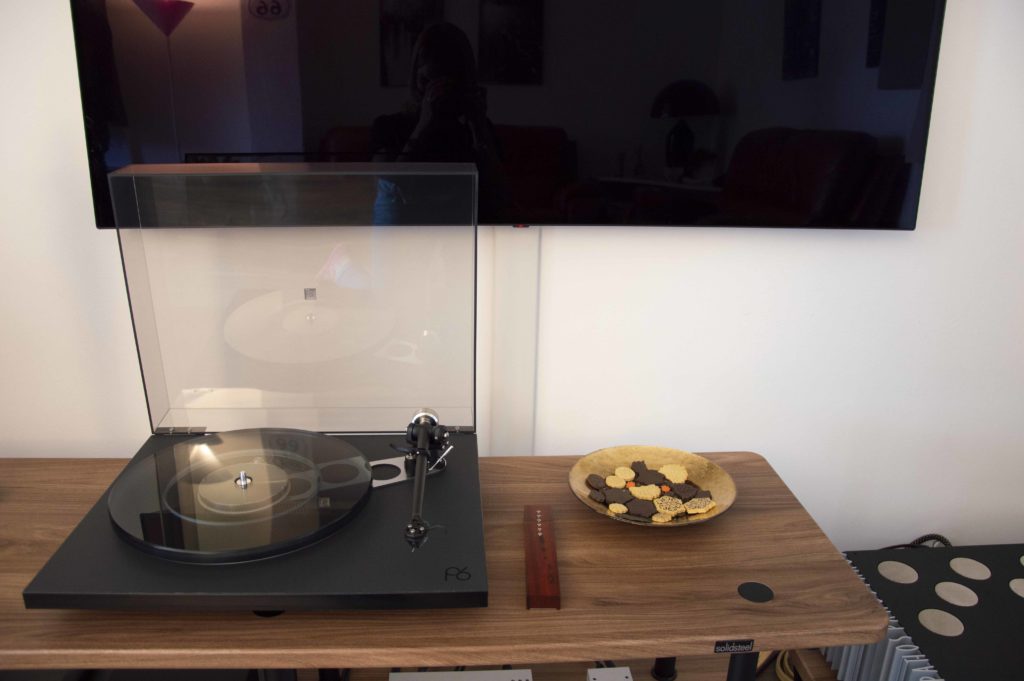 It may sound an evasive answer but I love all music.
In fact, I listen to rock, blues, jazz and a bit of all Italian songwriters.
I’m still away from classical, as a result of an “indigestion” suffered as a kid and not yet overcome.
I don’t have any particular references when it comes to testing as I really have many.
A few discs are not enough.
Here’s an anecdote: references have changed since Klipsch was introduced – some of the albums that I previously considered for it are no longer suitable now.

– What time of the day do you prefer to listen to music with your system?

Unfortunately, my job takes a very long time.
Let’s say that the most favourite moments always fall on weekends; generally I don’t like a fleeting listen so when I decide I’m going to devote myself to music, I do it for at least a couple of hours.

– Which audio format do you prefer? Digital or analog? Could you explain why?

Analog, without a doubt.
I still remember when the first CDs came out, I looked at them with distrust, I didn’t like the physical object and this even before listening to them.
At the very first listening, however, I noticed a greater “cleanliness” of the sound, in the sense that the disturbances introduced by the turntable I was using at the time were absent, certainly not a sample of silence. Unfortunately, along with these ailments, something else was also gone.
So far, no digital system has yet managed to give me that something back.
Having said that, it is fair to say that the analog route is complex and expensive so I wouldn’t recommend it to those taking their first steps.

– When did you first hear about Solidsteel?

As long as I can remember, Solidsteel has always been present in my favorite magazine  “AudioReview”.

The replacement of the previous piece of furniture with Solidsteel supports was initially induced by mainly aesthetic reasons.
On one hand, I must say that the result exceeded expectations – the vision of the system was decidedly lightened, more relaxing and pleasant.
On the other hand and from the audio point of view, the advantages have been considerable and I am referring in particular to the turntable.
Before adopting SolidSteel supports, in order to obtain adequate insulation, I had adopted eight very expensive spring-suspended feet with an “esoteric” design and a slab of marble.
I must say that the result was quite impacting from a visual point of view and by the way…my wife is truly a saint!
After countless tests, I had to admit that the new mounts made the old decoupling system completely useless, much to the satisfaction of the aformentioned lady.

– Considering your attention to every aspect related to the components of your system, their correct positioning and the listening environment, what advice would you give to those who are approaching the world of Hi-Fi for the first time? What is essential in your opinion to compose a first Hi-Fi system?

Being the elements so many, it is so difficult to define the “weights” in the final result so I really don’t feel like giving precise advice.
However, the only thing I can suggest is to listen a lot, to experiment and above all to seek balance.
To use the simplest example that comes to mind, I can say that it is perfectly useless to adopt a beautiful and very expensive speaker if the amplifier that will drive it is not up to par.

– How do you experience the emotions that music gives? Do you like attending concerts, shows and musical events?

Home listening and live music are two very different and complementary things, no matter how “faithful” the system you own.
At home, attention is often paid, sometimes too much, to the quality of reproduction.
During Live music, emotions prevail.
This bad period, which I hope we are leaving behind, has favored listening to our home systems, but now it’s time to go back to attending concerts!
I love music but also the crowds in theaters, stadiums and squares; experiences lived and almost taken for granted until just over a year ago.

– Suggest three albums that we should definitely listen to.

Impossible answer! With some effort, I can name three Artists.
In strictly alphabetical order, David Bowie, Bob Dylan, Bruce Springsteen
(the latter added under threat from my wife with whom I am lucky enough to share both the passion for music and for high fidelity.

Many thanks to Mr. Daniele for his precious and super interesting contribute.